The volume "Macedonia, Southern Part" covers approximately the province of Macedonia prima as this administrative unit was established in the 5th century and corresponds to the area Makedonia of modern Greece. This area comprises the region from Epirus in the west to Thrace in the east and is bordered to the north by the Republic of North Macedonia, to a lesser extent by Bulgaria and Albania and to the south by Thessaly and the Aegean. Within the TIB series, the territory of volume 11 abuts by the regions of the published volumes TIB 1 (Hellas und Thessalia), TIB 3 (Nikopolis und Kephallēnia) and TIB 6 (Thrakien) as well as the region TIB 16 (Macedonia, Northern Part), which is in preparation. The immigration of Slavs in the 6th and 7th centuries has been a decisive influence on the medieval toponymy and the settlement history of Macedonia. In the Middle Ages, Macedonia was a region of contacts between Byzantine Greeks and Slavs (e. g. Bulgarians, Serbs). The metropolis of Thessalonica was of great importance in political, cultural and economic terms. In the 10th and 11th centuries, the peninsula of Mount Athos developed into a center of monasticism and extended its spiritual and economic influence far beyond its borders. As for the Late Byzantine period, extensive written sources (Greek documents for monasteries, Ottoman tax registers) provide important insights into toponymy, population, and economy. 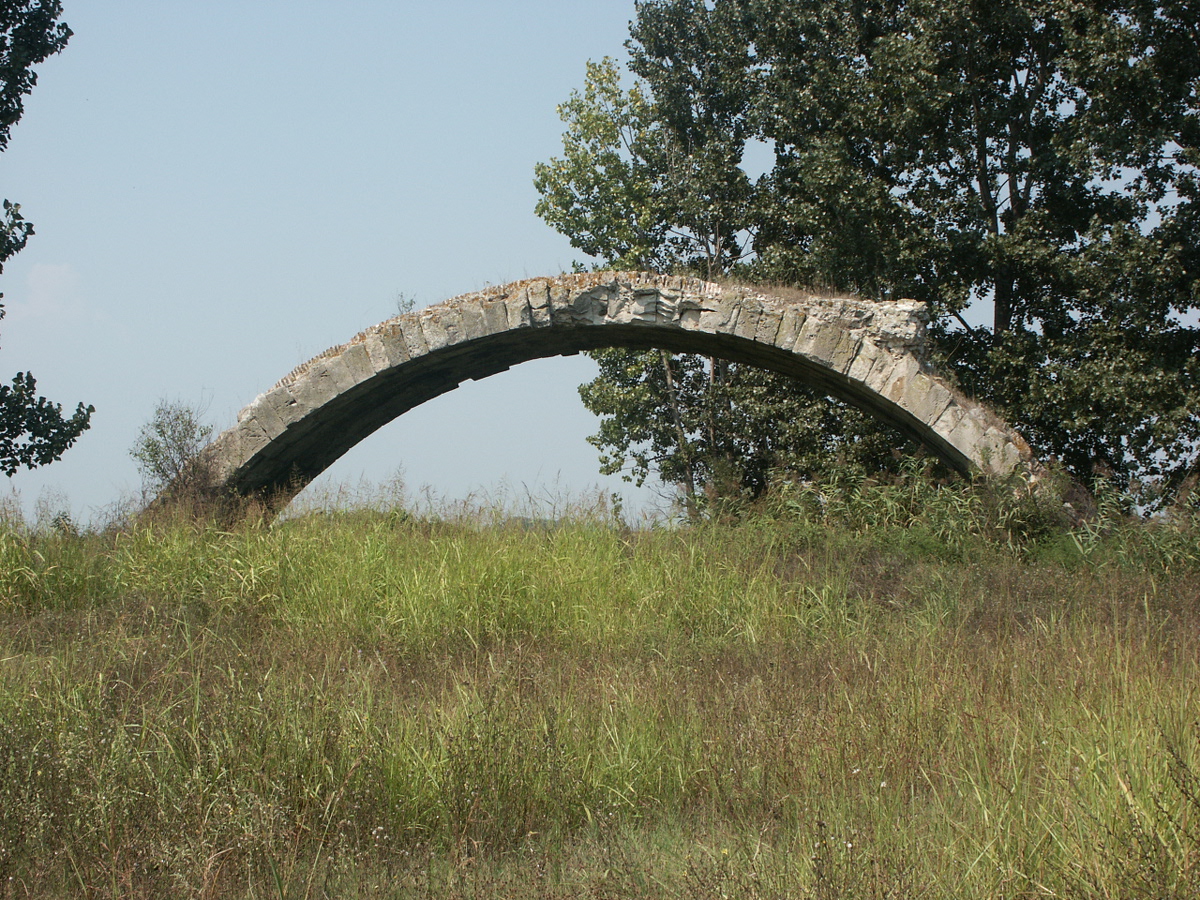 The Late Roman Bridge near the Gulf of Thessalonica, Northern Greece

The Late Roman Bridge near the Gulf of Thessalonica, Northern Greece 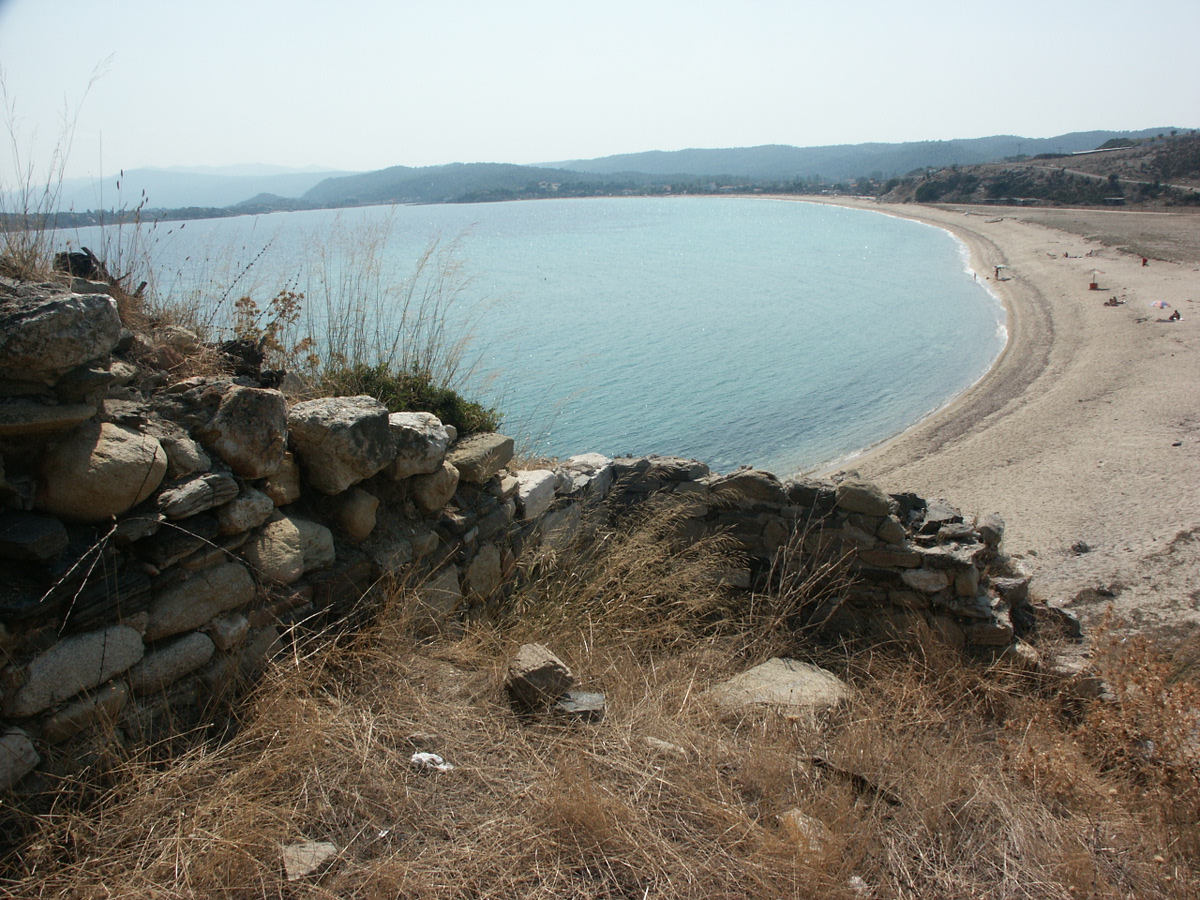 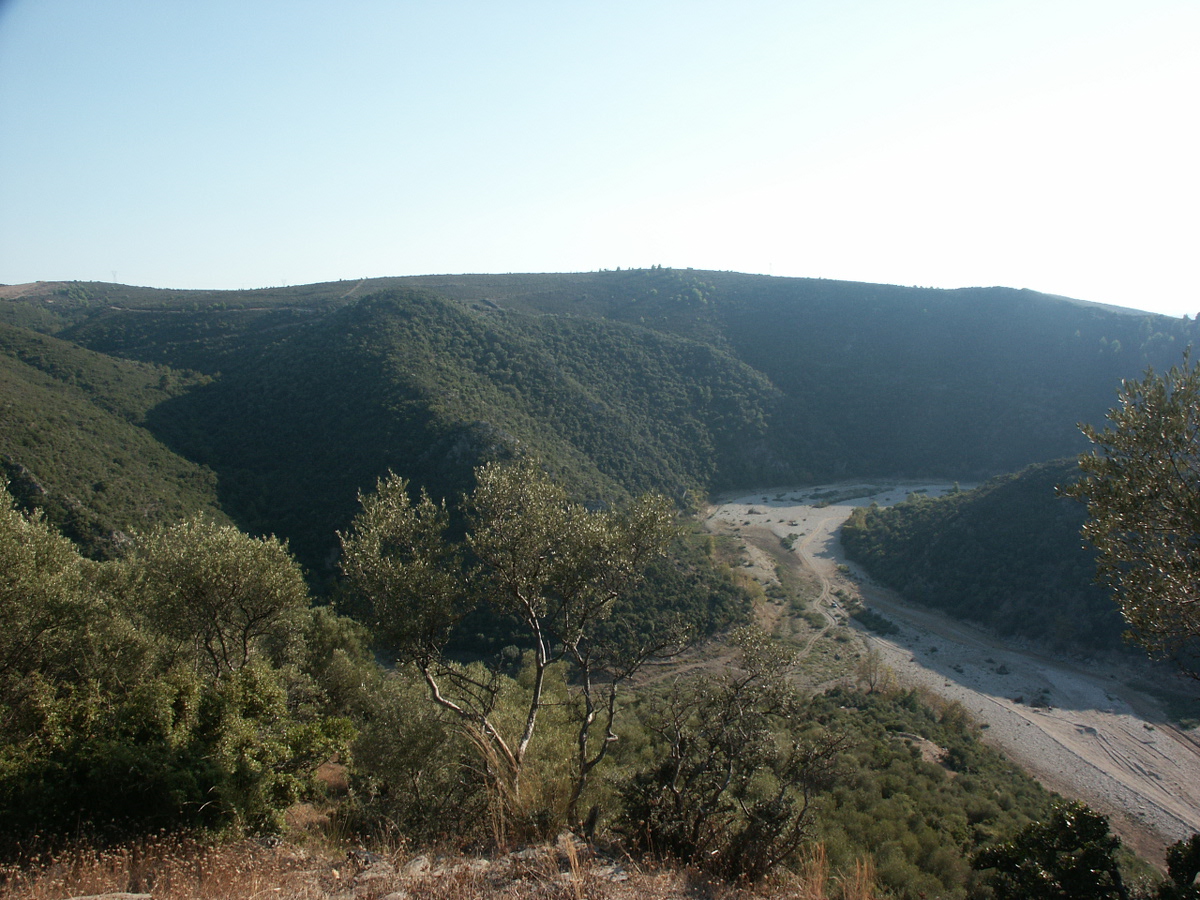 The Valley of the River Chabrias near Ormylia, Chalkidike, Northern Greece

The Valley of the River Chabrias near Ormylia, Chalkidike, Northern Greece 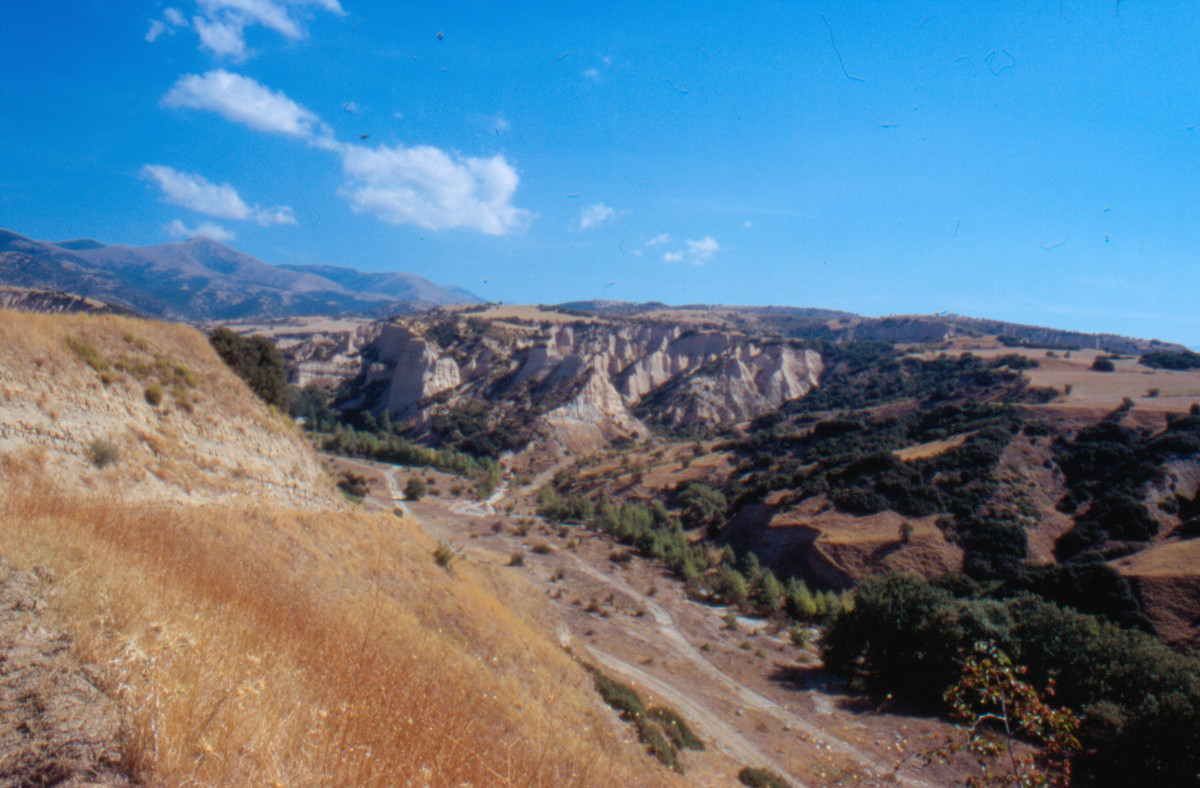 The TIB 11 area covers thirteen administrative districts (nomoi) in northern Greece, divided into the three current peripheral regions of Western Macedonia (capital Kozanē), Central Macedonia (Thessalonikē) and Eastern Macedonia and Thrace (Komotēnē), covering an area of 34,000 km2. The area of TIB 11 extends from the Pindos Mountains in the west for slightly more than 300 km to the Nestos River in the east; in the N-S direction it is about 160 km from the mining area east of the Rupel Pass to the Kassandra Peninsula.

The western part of the area is part of the Dinaric branch of the Alpine mountain building system with its strike direction from northwest to southeast. Western Macedonia is characterised by mountains with partly hilly and partly flat zones between them. The Northern Pindos, which reaches as far south as the Zygos Pass near Metsobon, slopes much more gently to the east towards the basin of Kastoria and the upper valley of the Haliakmōn to the south than to the west. To the north and north-west of the Kastoria basin rise some mountains, behind which the basin with the Prespa lakes spreads out (water level at about 850 m above sea level, area of both Prespa lakes in total about 318 km2). To the east, the Upper Haliakmōn Valley is bordered by the "central mountain range" of Western Macedonia (Siniatsiko or Askion 2,107 m). Southeast of Grebena, the Haliakmōn valley breaks through the mountain range. Further south (Chasia Orē etc.), the watershed between the Haliakmōn and Pēneios rivers then forms the border of Macedonia with Thessaly.

To the east of the "central mountain range", a sequence of three basin landscapes follows, which extends in a NW-SE direction from Phlōrina to Serbia and is divided into three sections: 1. the lowlands east of Phlōrina as a southern continuation of the Pelagonian Basin of Bitola and Prilep; 2. the plain of Eordaia, which is bordered to the east by the massive limestone mountains of Bermion (2. 052 m) and to the north of which are lakes, the largest of which is Lake Begoritis or Ostrobos, which varies considerably in size; 3. the Kozanē basin, in the south-east of which the middle Haliakmōn has been dammed since the 1970s to form a long, narrow lake (74 km2). The second, lower breakthrough valley of the Haliakmōn forms a deep gorge between the Bermion Mountains to the north and the southeastern adjacent Pieria Orē (Phlampuro), which consist of crystalline shales rising to 2,190 metres. These pass in a south-easterly direction over the Titaros (1,834 m) and the Bulgara (1,689 m) into the Olympos (2,918 m). East of the "eastern mountain range", which stretches from the Boras Mountains (border to northern Macedonia) southwards via Bermion (around 2,050 m) to the Pieria Orē, there are mainly lowlands: In the north, the valley of the south-flowing Ludias (Lydias), in modern times also Moglenitsa(s), which, coming from the Moglena basin (Turkish Karacova, Karatzoba, currently Almōpia), reaches the Kampania plain east of Edessa. The Moglena basin and the Ludias valley are separated from the Axios/Vardar valley to the east by the Païkon Mountains (1,650 m), which consist mainly of limestone. From the Bermion Mountains, the plain of Campania extends about 80 km to the east.

The wider hinterland of Thessalonikē and around Thermaios Kolpos was a deep tectonic trench in the early Neogene with a NNW-SSO orientation, which was filled by sediments over time and flooded by rising sea levels in the Holocene. The rivers Haliakmōn, Ludias, Axios and Galikos flow into this former part of the sea. The former Lake of Giannitsa in the middle of the Campania was a shallow, marshy, partly silted body of water fed mainly by the Ludias, which had an area of about 100 km2 at the beginning of the 20th century. Until ancient times, the lake was an extension of the Gulf of Thessalonikē. In the course of draining the lake (in the 1930s), the course of the Ludias was greatly altered and most of its water was diverted to the Haliakmōn. The broad plain of the Axios or Vardar valley, which extends from the demarcation against TIB 16 (roughly also modern state border) to Thermaïkos Kolpos, covers an area of about 40 km in the E-W direction and 70 km in the N-S direction. The rivers mentioned, especially the water-rich Haliakmōn and Axios/Vardar, have in the course of the centuries shifted the coast of Thermaios Kolpos considerably to the south in their estuary area through their alluvium. The extensive lowland is the southern end of the great Vardar furrow, which continues over the southwestern edge of the Chalkidikē into the Kassandra peninsula.

The eastern boundary of the broad plain of the Axios valley against the Strymōn valley is formed by low mountains (Krusia, Maurobuni, Bertiskos, the Orē Bolbēs, Kerdylia Orē; all below 1,200 m altitude), which extend from lakes Doïranē and Kerkinē in the northwest to lakes Lankada and Bolbē in the southeast. With a length of about 80 km and a width of about 35 km, they are the largest geomorphological unit in Eastern Macedonia. The lakes Lankada (42 km2, 75 m above sea level) and east of it Bolbē (70 km2, 37 m above sea level) are remnants of a single large Pleistocene lake (Mygdonia limnē) and form a contiguous hydrotop draining eastwards via the Rēchios into the Strymonikos Kolpos.

The lower valley of the Strymōn extends from the Balasitza Mountains (Belasica, Mpeles, Kerkinē Oros, 2,030 m) and the Rupel Pass to its mouth in the Aegean Sea. The length of this largely closed depression, which runs mainly in a south-easterly direction, is about 80 km, its width up to 30 km. In geological terms, the lower Strymōn Valley is the boundary between the Serbian-Macedonian Massif in the west and the Thracian Massif of the Rodopes in the east. Two lakes have formed in the valley as extensions of the river, Lake Kerkinē in the northwest and Lake Achianos (approximately between 80 and 140 km2 depending on the water level) in the southeast. Between 1931 and 1933, this landscape was fundamentally reshaped by river regulation. The upper lake, the Kerkinē, was enlarged as a reservoir for irrigation, the lower lake was drained and cultivated. In the agriculturally productive region, navigation on Lake Achianos facilitated the transport of goods. The north-eastern boundary of the lower Strymōn valley is formed by the western foothills or foothills of the Rodopes, in particular the Orē Brontus with its iron ore deposits and the Menoikion Mountains, which slope steeply towards the south-east and show karst features such as funnel-shaped depressions (sinkholes) and rivers (ponors or catabothras) running underground for a longer or shorter distance. About 15 km north of the mouth of the Strymōn River, the depression of the Angitēs Valley meets the Strymōn Valley vertically from the northeast. The Angitēs comes from the Drama basin, which extends over a distance of 50 km from its sources to close to the port city of Kabala. The basin, which is up to 25 km wide, is surrounded by mountains consisting mainly of limestone and marble (Pangaion to the south, Menoikion to the northwest, Phalakron to the north and the Orē Lekanēs to the east). The mountains north and east of Drama slope in a north-easterly direction towards the middle Nestos valley, which forms the eastern boundary of the processing area (with TIB 6).

To the south-east of Thessalonikē, the 1,201 m high Chortiatēs forms the transition to the Chalkidikē peninsula. South of the depression with the lakes Lankada and Bolbē, mountains rise in the strike direction from northwest to southeast. The western range is formed by Chortiatēs and Cholomōntas (1,165 m) with continuation on the Sithōnia peninsula (811 m). To the east runs a mountain range (mostly up to 900 m) in which the historic mining area of Sidērokausia ("iron smelters") is located. It is interrupted by a depression in the Hierissos area and continues on the Athōs peninsula, where the Athōs peak, a pyramid of marble rock, reaches an altitude of 2,030 m above sea level.