The volume 16 of the TIB entitled "Macedonia, Northern Part" comprises the Early Byzantine province of Macedonia Secunda and parts of the provinces Macedonia Prima, Dardania, Epirus Nova, Praevalitana and Dacia Mediterranea. It is closely connected to the volume on "Macedonia, Southern Part" (TIB 11, Peter Soustal). Since the historical area of Macedonia is today divided between Greece, the Republic of North Macedonia and Bulgaria, the volume "Macedonia, Northern Part" (TIB 16) covers the whole territory of North Macedonia and two districts of Bulgaria (namely Kjustendil and Blagoevgrad). The volume on "Macedonia, Northern Part" thus bridges the gap between the volumes TIB 6 "Thrace" and TIB 11 "Macedonia, Southern Part". The research for this volume is based on written sources (mainly in Greek, Latin, Old Slavonic and Ottoman), monuments, archaeological reports and a vast variety of toponyms, as well as extensive secondary literature, mostly in the South Slavic languages. Research trips to the area are regularly conducted. 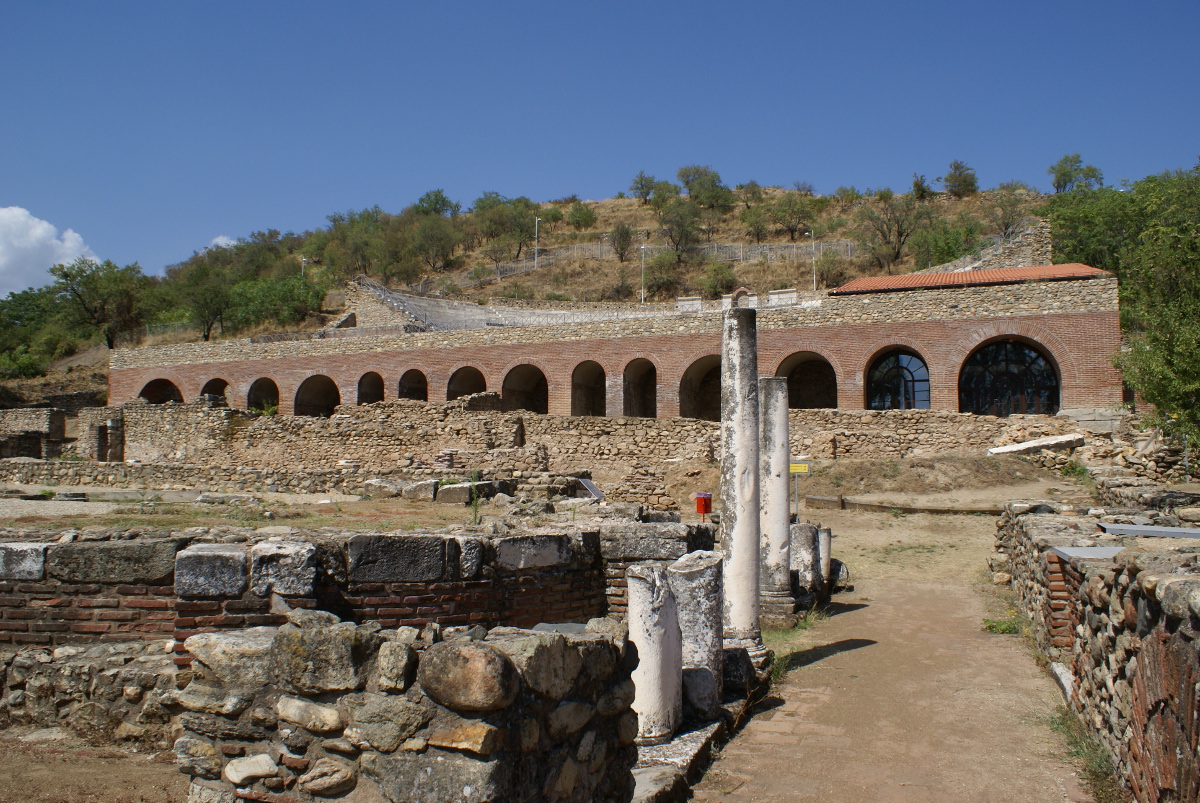 Markovi Kuli Castle near Prilep from the south, Republic of Northern Macedonia

Markovi Kuli Castle near Prilep from the south, Republic of Northern Macedonia 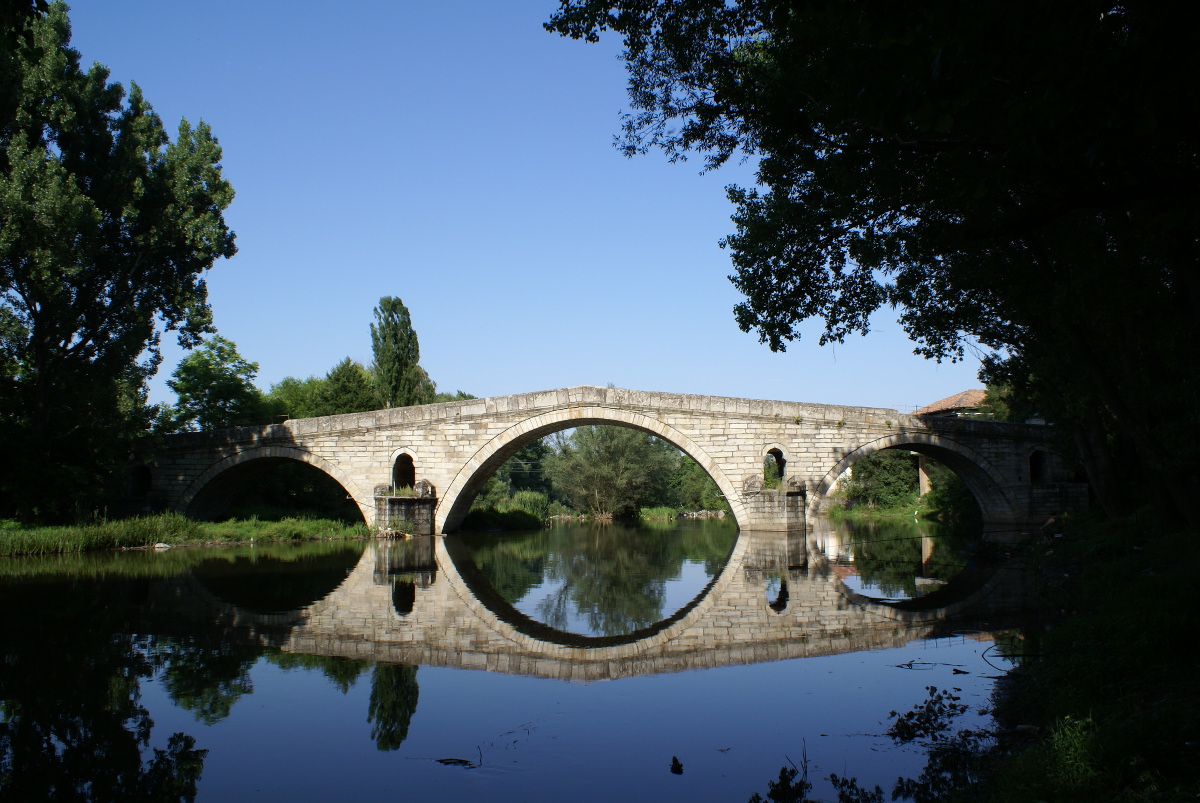 The Ottoman Bridge called Kadin Most in Nevestino, Bulgaria

The Ottoman Bridge called Kadin Most in Nevestino, Bulgaria 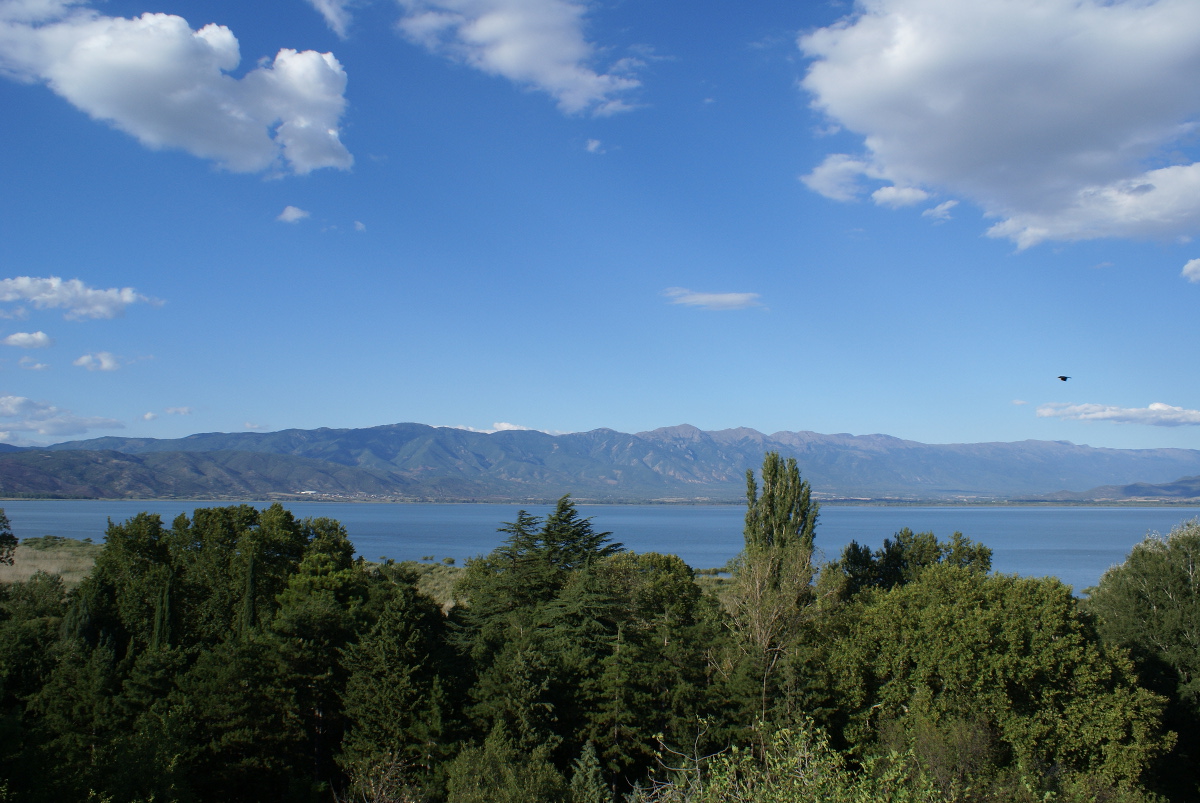 The old city gate of Ohrid, Republic of Northern Macedonia

The old city gate of Ohrid, Republic of Northern Macedonia 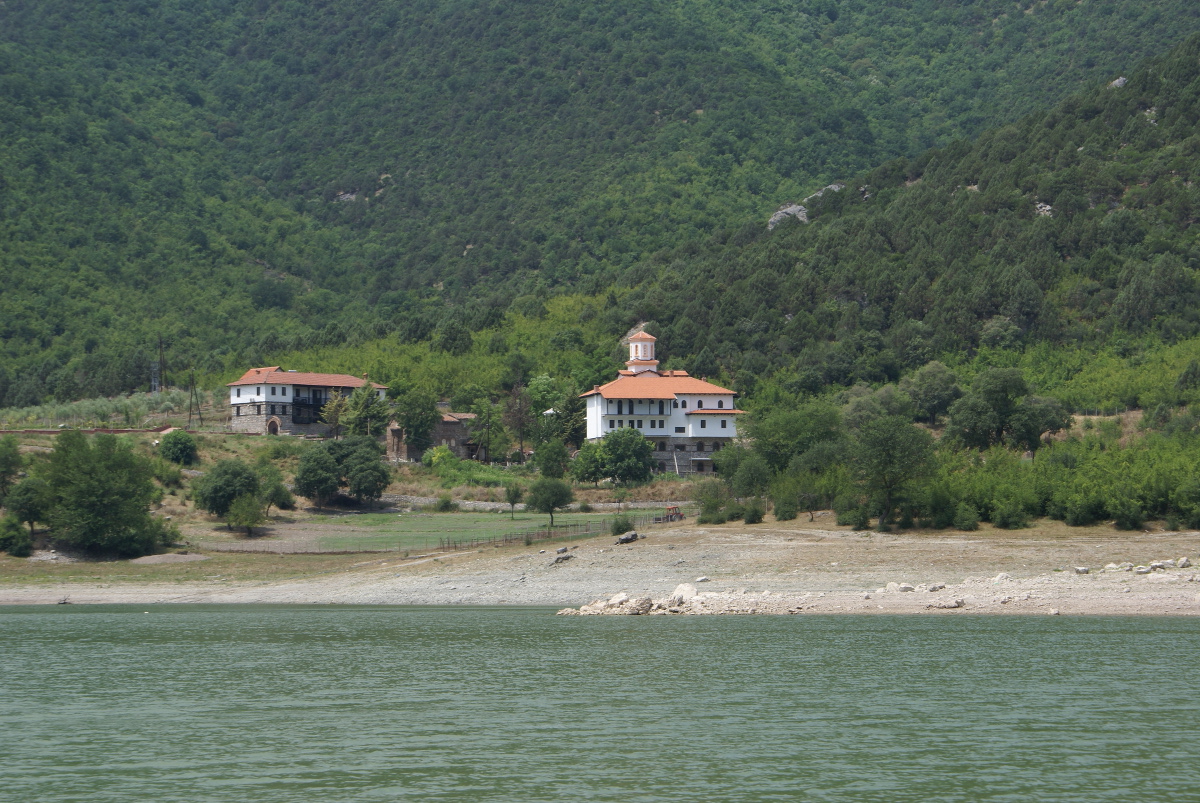 The Monastery of St. George Pološki, Reservoir of Tikveš, Republic of North Macedonia

The Monastery of St. George Pološki, Reservoir of Tikveš, Republic of North Macedonia

From an orographic and hydrographic point of view, the processing area of TIB 16 is divided into the Macedonian basin and the Albanian coastal area. In Macedonia, the Dinarides break up into individual mountain ranges. In the Struma river valley, the mountain ranges belong to the Thracian Massif, while in the other parts of the country they belong to the Dinaric fold mountains. Instead of limestone, slate, granite and gneiss dominate there, which increases fertility and forest density. The major landscapes in Northern Macedonia are the Vardar Valley (Povardarje), Pelagonia (Pelagonija), the Ovče Pole and the Ohrid and Prespa areas. The Vardar Valley is divided into five sections: Polog, the Skopje basin (Skopska Kotlina), that of Veles, the Tikveš region and the Gevgelija and Valandovo basin (Gevgeliško- Valandovska Kotlina). The area of Polog includes the upper reaches of the Vardar River and consists of an upper (southern) and a lower (northern) part (Gorni and Dolni Polog). Polog is bordered by Šar Planina to the west, Suva Gora to the east and Vlaknica and Bukovik to the south. The Skopje basin also forms part of the Upper Vardar Valley (Gorno Povardarje). It is bordered by the mountains of Skopska Crna Gora in the north, Žeden in the west and Vodno and Jakupica in the south. The gorges of Derven in the west, Kačanik in the north and Taor in the southeast delimit the Skopje basin from Polog, the Kumanovo basin (Kumanovsko Pole) and the Ovče Pole, respectively. In the central section of the Varda Valley lies the Tikveš basin landscape. In the north, the Tikveš basin extends to the Veles basin, in the south to the Demir Kapija gorge (Demirkapiška Klisura) and to the Valandovo and Gevgelija basins. The Valandovo and Gevgelija basin is located in the southernmost part of the Vardar valley of northern Macedonia. To the east of this basin is Lake Dojran.

Outside the Vardar region, to the north-east of the Valandovo and Gevgelija basin, lies the Strumica basin (Strumešnica in Bulgarian). This is composed of the basins of Radoviš, Strumica and Petrič, which is already in Bulgaria. The basin is framed by the Plačkovica Mountains and the Ogražden Mountains in the northwest and north, respectively. The Smrdeš and Plauš mountains form the boundary in the west, while in the south the Belasica mountains push forward like a bar in a W-E direction. Only to the east is the river valley open to the Struma (Greek Strymōn), which gives access to the Serres plain and subsequently to the Aegean Sea. The demarcation of the three above-mentioned basins can be seen in two prominent points in the course of the Strumica river valley. At the south-eastern edge of the Radoviš basin is the first constriction of the river valley, which is caused by the Ogražden and Smrdeš mountains. The second narrow point is located at the present Ključ, where the Belasica Mountains advance towards the river from the south and the Ogražden Mountains from the north.

To the west or southwest of the Strumica basin is the Kriva Lakavica river valley. It is framed by the Gradeška planina in the southeast, the Smrdeš mountains in the northeast and the Konečka planina in the southwest. The valley is open in the NW direction to the town of Štip, as the Kriva Lakavica flows from the southeast to the northwest to join the Bregalnica river as a left feeder.

The town of Štip is located about 60 km east of Skopje at the confluence of the Otinja River and the Bregalnica River. It lies on the SE edge of the Ovče Pole and on the SW edge of the Kočani plain, respectively, and controls access to both the Radoviš basin and the Kriva Lakavica river valley. Northeast of Štip is the Kočani basin, surrounded by the Plačkovica mountains to the south and Osogovo to the north, and crossed by the Bregalnica river. Northwest of Štip, or east of the Skopje basin, is the Ovče Pole, a hilly plain with sparse vegetation and little water. North of it is the Kumanovo basin (called Žegligovo in the Middle Ages), which is crossed by the Pčinja River and adjoined to the east by the Slaviško Pole. Slaviško Pole is located on the Kriva Reka River in north-eastern northern Macedonia and borders the region of Kriva Palanka to the east. Finally, south of Kriva Palanka is the Maleševo area on the upper reaches of the Bregalnica River.

In the west of Northern Macedonia, Pelagonia, the area of Ohrid and Prespa Lakes, Kičevija and Debarsko form important large landscapes. The Pelagonia basin stretches from the Dautica Mountains in the north across the North Macedonian-Greek border to Phlōrina in the south. To the east it is bordered by the Babuna, Selečka and Nidže mountains, while to the west it is framed by the Baba and Buševa mountains. This basin is in turn divided in a N-S direction into three sub-basins: the Prilepsko Pole, the Bitolsko Pole and the Phlōrina Basin. To the east of the Pelagonia basin is the Mariovo landscape, and to the west is the Demir Hisar area.

The area of Ohrid and Prespa Lakes is located in the southwest of Northern Macedonia. North of it is the Kičevija on the upper reaches of the Treska River, which flows north towards Skopje. Along both banks of the river is the area of Poreče. West of the Kičevija is the Debarsko, which is divided into the areas of Gorna and Dolna Reka, Debarska Župa and Debarsko Pole. A large part of this area is now flooded by a reservoir (Debarsko Ezero).

On the territory of Bulgaria, at the north-eastern edge of the TIB 16 study area, there is first the basin of Kyustendil, which connects south-west to the basin of Radomir and is crossed by the Struma River in a south-easterly direction. East of Kyustendil, the Rila Mountains form a compact mountain mass with high mountain character. Northwest of these mountains lies the Dupnica and Sapareva Banya basins, through which the Džermen River flows. North of Blagoevgrad, the Struma valley widens into a basin with about 10 km E-W and about 5 km N-S extension. In this section, the Struma river valley is framed by the Pirin Mountains to the east and the Vlaina Mountains to the west, while to the south it is bordered by the Kresna Pass (Kresnenskijat prolom, Kresnenskoto defile, Kresnenskata klisura), where the Maleševska planina to the west and the Pirin Mountains to the east meet. At this narrow point, the Struma breaks through and flows in a southerly direction towards the Aegean Sea. The area south of the Kresna Pass is bordered by the Pirin Mountains to the east, the Rupel Pass, the Slavjanka (Ali Botuš) and the Belasica Mountains to the south and southwest, and the Ogražden and Maleševska planina to the west. It is connected to the towns of Strumica and Štip to the west and northwest via the Strumešnica (Strumica) valley.

According to the relief, the processing area is a mountain and basin country. About 80% of the territory is hilly or mountainous, the remaining 20% plain. The TIB 16 study area is mainly characterised by rivers draining to the south, which lead to the partly marshy, fertile coastal plains of the Thermaic Gulf and the northern Aegean Sea. The rivers of northern Macedonia belong to three river basins. The Aegean river basin is the largest with a catchment area of 87% of the country's territory, followed by the Adriatic with about 12% and the small remainder accounted for by the Danube river basin. The longest and largest river in Northern Macedonia is the Vardar with a total length of 388 km. Of this, about 300 km are in Northern Macedonia. In southwestern Bulgaria, the Struma is the longest and largest river with about 415 km, of which 290 km are in Bulgaria. It rises on the slopes of the Vitoša Mountains at 2,180 m above sea level and flows first in a northerly, then westerly direction to the village of Pernik, before finally turning south to Greece and flowing into the Aegean Sea. From the point of view of limnology, the processing area is rich in findings. In the Republic of Northern Macedonia there are a total of 160 lakes, of which 50 are natural and 110 are artificial reservoirs. The largest natural lakes are Lake Ohrid (area 348.8 km2), Great Prespa Lake (area 274 km2) and Dojran Lake (area 43 km2).